I love reading memoirs. I would say that they make up about 90% of the books I read. I think I love them so much because, since being in recovery, I’ve learned the importance of sharing stories. Hearing the stories that others have to tell helps me heal, and I hope that others hearing mine helps them in the same way.

I recently read Carol E. Miller’s Every Moment of a Fall, A Memoir of Recovery Through EMDR Therapy, about her PTSD recovery, and I am again amazed at the relief and healing that EMDR offers. It immediately took me back to several years ago when I was going through my own round of EMDR therapy to help with my recovery.

Although Carol’s story of trauma and mine are completely different, there is still a lot 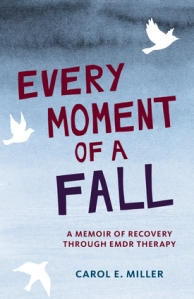 that I can relate to as she goes through the process of recovery. Her trauma was caused when the airplane being piloted by her father, and carrying her family, crashed. Carol was the only one to go unscathed physically; her mother and father were badly injured, and her sister was killed. She suffered a lot of guilt and shame being the only one uninjured, and even blamed herself for the crash for a long time.

The trauma that caused my PTSD was rape and physical abuse, so like I said–completely different from Carol’s. The feelings that we both had after are surprisingly similar though. We both suffered with our feelings of inadequacy and self-loathing. We both tried to self-medicate to control the symptoms of PTSD that we were experiencing without knowing or understanding what was causing them. And out of sheer desperation, we both turned to EMDR skeptically because we didn’t know what else to do.

Every Moment of a Fall takes you through Carol’s experience with PTSD and EMDR therapy. She briefly talks about the mechanics of how EMDR works and what happens in the brain, but through her narration, you are able to see and feel what it is really like to go through the process. Little by little, as Carol works on healing, you can see the positive changes that are taking place in her–self-awareness, self-compassion, and self-worth. Her accounting of her EMDR work is honest and real, and she demonstrates that while it is possible, recovery isn’t something that happens overnight, that it takes time, patience, and perseverance.

This isn’t just a book for people with PTSD (although it will undoubtedly help them), or people considering EMDR. It’s a book for anyone who wants to find comfort and hope in the stories of others. I highly recommend it.

You can buy Carol’s book here.

The other day, my husband, stepson and I were in the car, coming home from shopping, and we were having a discussion about why we each behave the way we do. I’m not sure how exactly we got on this subject, but that often seems to be the way that important conversations start. My stepson, whose intellect is far beyond his eleven years (even though his behavior and emotional age are happily in line with his chronological age), spoke of a situation in which he acted in a less than favorable way. He said, “I know myself, I knew what was going to happen.” He went on to say that knowing what’s going to happen doesn’t always stop his bad behavior.

Isn’t that the truth? An eleven year old just summed up my whole drinking career in one sentence! Knowing what was going to happen when I drank, no matter bad, didn’t stop me from doing it. I would like to say that when I drank I was in denial about the negative consequences, that I really thought that each time I took that first sip of booze that, “this time will be different.” But I wasn’t in denial, I was in my right mind enough to know exactly what would happen – I would drink, I would do and say bad things, I might punch someone, wreck a car, or get arrested. And yet, I drank.

“The actual or potential alcoholic, with hardly an exception, will be absolutely unable to stop drinking on the basis of self-knowledge. This is a point we wish to emphasize and re-emphasize, to smash home upon our alcoholic readers as it has been revealed to us out of bitter experience.”

So, clearly Bill and Bob knew that self-knowledge wasn’t enough to help the alcoholic get and stay sober, and I agree. It wasn’t for me. For me it took treatment (twice!), completely removing myself from my regular life, removing triggers and access to booze, to get sober. And then it took a lot of work – the steps with a sponsor, learning honesty, acceptance, and forgiveness – to stay sober. You know what else it took? Yep, you guessed it. Self-knowledge.

Isn’t it funny how that works? The very thing that wasn’t ever going to get me sober is the very thing that I need to stay sober. I had to delve into those parts of me that I didn’t want to know and get acquainted. I had to look closely and carefully at my motivations for just about everything. I had to learn what made me tick. At times, it felt like I was meeting someone new, a stranger who I needed to get to know. Sometimes it was scary and sometimes it was comforting, but getting to know myself was the key to being able to change those parts of me that needed changing to be able t 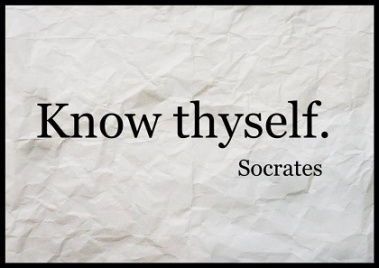 o live a life that is happy, joyous, and free.

These days, I feel like I know myself pretty well. The things that I say and do and feel no longer surprise me. That isn’t to say that I don’t screw things up from time to time, I do. The difference now is that I am usually able to understand why I screwed up, and I am quick to try to fix it, and learn from it, so that when a similar situation comes up again – and it will – that I have enough awareness to react differently.

So no, self-knowledge may not be enough to get an alcoholic sober, but it is just what I need to stay sober and be happy.

I’m not sure that my stepson realized how insightful he was about knowing himself, but not really knowing what to do with the knowledge. What I do know, is that I will be there to help him figure it out along the way. And I can do that because I know me.

Happy 4th of July! It’s a day that we celebrate freedom, and for me that means reflecting on the things that used to enslave me, from which I’m now free. The biggest of which is active alcoholism. 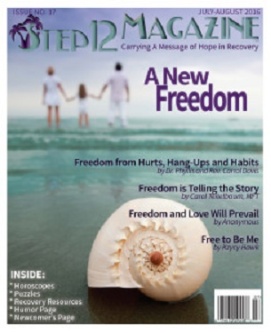 I wrote an article for Step 12 Magazine, which they were kind enough to make their cover story for the July/August edition. You can download the issue for free and read my article “A New Freedom”(pg. 6) here. Step 12 Magazine is a publication for people in recovery, and it’s been helpful to me–it might be for you too.

Today, as you spend time with family and friends, and tonight as you watch fireworks exploding into beautiful bright shooting stars, take some time to remember what freedom means to you.

My journey through life, hand in hand with the Father.

the MIRACLE of the MUNDANE

Finding hope in the midst of life's storms

One Girls Journey For a Better Life...

ongoing struggles with addiction and recovery

Spirit Soul Self Discovery and Recovery

I'm on a path. It meanders.

I got sober. Life got big.

can i get a witness
The Everyday Addict

Hi! I’m Ashley and I am just your average everyday addict! Recovery is a new adventure that is hard, but it CAN also be fun and exciting! I created this blog to share my experience with addiction, my perspective as a youth in recovery, and the joys of my recovery. Clean & sober since 10/27/2008!

the liminal life of m

Trying to get sober. Again...

Learning to live without alcohol